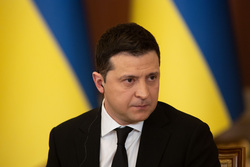 If Russia recognizes the results of the referendums on the entry of the LNR, DNR Zaporozhye and Kherson regions into Russia, Kyiv will have nothing to talk about with Moscow. This was stated by the President of Ukraine Volodymyr Zelensky.

“Russia’s recognition of these […] referenda as normal […] will mean that we have nothing to talk about with the President of Russia,” Zelensky said. The video was published in the telegram channel “You listened to Mayak”.

On the territory of the Donetsk and Luhansk People’s Republics, as well as the Zaporozhye and Kherson regions, referendums on joining Russia are being held from September 23 to 27. So, in Zaporozhye, 93.11% of voters voted for joining the Russian Federation, in the LPR – 98.42%, in the Kherson region 87.05% want the region to join Russia.