Home News What sentence did Vladimir Putin pass to the West during his speech...

With his keynote speech, the president today gave an answer to the people and the world about how he perceives the pressure of the West on our country and how he intends to act further: his words became a sentence for the European elites who are trying to agree on something with Zelensky. We will conduct a special operation in Ukraine until all the assigned tasks are completed, and we have no one to distract ourselves with, since Europe has finally said goodbye to its own sovereignty. Moreover, the once strongest economy of the continent has mixed all its developments with ashes, and inflation in the West is the result of rash actions of the EU leadership. This is how we can summarize today’s speech of the head of the country. As a solution, Vladimir Putin sees the need to focus on the Russian economy and social measures.

On the origins of Russophobia

On June 17, Vladimir Putin delivered an essentially strategic speech at the St. Petersburg forum. A few hours before the speech, the press secretary of the head of state, Dmitry Peskov, noted that this was not a formality. “It is difficult to overestimate the significance of this speech. The president himself is personally involved in the preparations, he is very responsible for this. And, of course, we will wait for his assessments of what is happening, his vision of the future. We are talking about … economic processes.”

Actually, the president did not disappoint. More precisely, first it was done by Russian computer scientists, who were able to repel a hacker attack on the forum, which delayed the president’s speech by only an hour and a half, and then the president himself.

Putin started with the main thing – he announced the change of the era. About the end of the period of unipolarity, despite all attempts to preserve it by any means. Confidence in world currencies has been deliberately undermined for the sake of outdated geopolitical illusions. The civilizational richness of the planet and the richness of cultures are difficult to combine with patterns that are imposed from one center. Especially given its inadequacy, as the president absolutely rightly noted, the United States after the Cold War declared itself to be God’s messengers on earth. Without responsibility, but with interests. They believed that Western dominance in global politics and economics was eternal. But nothing is eternal. And now, when Russia has rebelled, they are trying to pacify the rebel. “This is the nature of the current Russophobia and insane, as well as thoughtless sanctions against Russia,” Putin said.

The problem with the West, however, is that its leaders “they were so carried away by building myths about the backwardness of Russia and the weakness of its positions in the world economy and trade that they themselves, apparently, believed it”. As a result, pacification did not work. Vladimir Putin said that the gloomy forecasts regarding the Russian economy did not come true. That spells about “a dollar at 200 rubles” were part of the information war, and even some Russian experts believed in them. In fact, Moscow suppressed the inflation surge, although, according to the president, the inflation rate remains high. The head of state said that the budget of the Russian Federation for 5 months of 2022 was executed with a surplus of 1.5 trillion rubles, the consolidated budget – with a surplus of 3.3 trillion rubles. 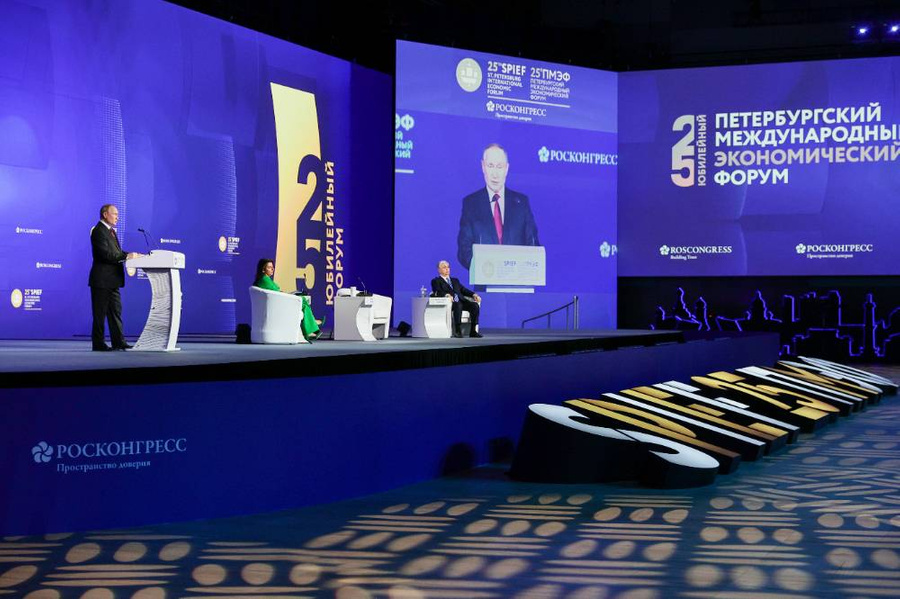 Yes, Russia suffered, but the “pacifiers” themselves suffered as well. “The economic blitzkrieg against Russia initially had no chance of success, and sanctions weapons are double-edged”, — reminded the head of the country, emphasizing that Western countries “do not conduct any special military operations”, and their inflation is high – in some countries of the Eurozone, growth has already exceeded 20%. Only direct, countable losses of the European Union for the year can reach 400 billion dollars, and these are the costs of the decisions taken, and not the consequences of the Russian operation in the Donbass.

Moreover, the president explained why all this is the result of many years of irresponsible policies of the G7 countries, including uncontrolled emission and accumulation of unsecured debts. The money supply in the US has grown by 38% in two years, and by 20% in the EU. “They printed, distributed money – and raked out all the goods from third countries,” Putin said.

At the same time, it is obvious that the West is not ready to admit its guilt and, instead of reforms, invents all sorts of fairy tales about the “Putin tax”, uses a special military operation in Ukraine as a “lifeline”. Actually, the Russian president, judging by his words, does not expect much progress in understanding from Europe. The European Union has finally lost its political sovereignty, and its bureaucratic elites are dancing to someone else’s tune to the detriment of their own economy. At the same time, there is no hope for any constructive opposition in European countries either: due to the absence of this opposition. “In Europe, similar parties change each other in power, but in reality nothing changes, it looks like a screen,” Putin says.

As for the special military operation, let’s be honest – even if the forum is economic, they were waiting for statements from Vladimir Putin on Ukraine. And this is logical: the entire Russian society lives on the Ukrainian issue, and the successful completion of our special operation will, without exaggeration, determine our entire future life. Therefore, the Russians – and not only the Russians – were interested in how the president sees the continuation of the special operation after almost four months of its implementation? Someone again began to spread rumors about “compromises”, about “willingness to stop.” The President dispelled all this. He made it clear that he sees Ukraine as a huge abscess, as a seriously neglected problem.

According to Putin, the West pumped weapons and advisers into Ukraine – and continues to do so now. No money was spared for the creation of a NATO foothold in the east, the cultivation of aggression and Russophobia, and no special attention was paid to the economy and the well-being of the population. Moscow, on the other hand, pays attention to its security, therefore, as Putin noted, “Russia’s special operation in Ukraine is the decision of a sovereign country based on the right to defend its security.” And all the tasks of the special military operation will be solved, the key to this is the courage and heroism of the soldiers, the consolidation of society.

The economy must be sovereign

However, according to the President, “sovereignty in the 21st century cannot be fragmented, therefore it is important for the Russian Federation to defend political sovereignty and economic independence”. And more than half of his speech concerned precisely this economic independence, which the president considered from all sides. Especially in a situation where, according to Putin, to replace the economy of imaginary entities [имеются в виду, вероятно, услуги. — Прим. ред.] comes the real asset economy.

For example, he spoke about the expansion of entrepreneurial freedoms. According to Putin, Russian business needs to be motivated, not forced. Therefore, it is necessary to abandon the majority of inspections of Russian business, whose activities are not associated with the risks of causing great harm. In addition, the decriminalization of economic crimes will continue, and the threshold for “large” and “especially large” damage due to accumulated inflation will be revised (according to the president, since 2016 this amount has been 50%). On the whole, the president said, every private initiative aimed at Russia’s interests should receive maximum support. And he himself put forward an initiative – the so-called industrial mortgage. Loans 5% per annum for enterprises that are ready to buy space for production.

He also mentioned the housing issue. The preferential mortgage program itself (now the rate is 9%) has been extended. According to Putin, this was done not only for the sake of citizens, but also in order to support the construction industry and related industries.

Reminds me of demographics. The future of Russia is a family with two, three or more children. This requires not just measures of financial support, but also a reorientation of the health and education systems to this. The head of state noted the idea of ​​technological sovereignty. Putin (and all normal Russians) wants Russian companies to be not just users of foreign technological solutions, but possess technological keys.

And, of course, where without the nationalization of the elites, about which the Russian president speaks on all platforms – and his words are confirmed by the activities of Western countries that, without trial or investigation, “squeeze” the property and other assets of Russian businessmen abroad. According to the president, entrepreneurs should link their future and the future of their children with their homeland. Putin invited businesses to invest in the country. Following the example of patrons and merchant families of the past, who did not offend their direct heirs, and inscribed their name in the history of the country. Moreover, it is still not clear what is more important for the heirs – the money received or the good name of their ancestors, which no one will squander for sure.

Thus, the president is sure “Russia is entering a new era as a powerful, sovereign country and will become even stronger.” We don’t really have any other options.

Will Russia nationalize the elites in the near future?

Over 22,000 people evacuated per day from dangerous areas of Ukraine and Donbass

In the port of Berdyansk, the ship Saratov, damaged by Tochka-U, was lifted

Over 22,000 people evacuated per day from dangerous areas of Ukraine...

The dollar exchange rate on the Moscow Exchange exceeded 55 rubles...

In the port of Berdyansk, the ship Saratov, damaged by Tochka-U,...

Joe Turkel, who played bartender in The Shining, dies at 94