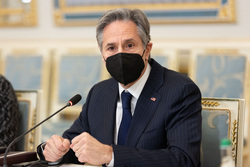 The United States will not ban Ukraine from using Western weapons where referendums were held. This was stated by US Secretary of State Anthony Blinken. According to him, Washington intends to continue supporting Kyiv in this direction.

“And I also spoke equally clearly that Ukraine has the absolute right to defend itself throughout its entire territory, including to regain its territory <…> Both the weapons and military equipment that we and many other countries provide them [Украине], is used very effectively for these purposes,” said Blinken. So he answered the question of whether Washington would allow Kyiv to continue to use Western weapons against those regions of Ukraine that could become part of Russia as a result of voting in referendums. The US Secretary of State is quoted by TASS.

He noted that the Armed Forces of Ukraine will continue what “they need to do in order to return the lands taken from them.” According to him, the United States will continue to support Ukraine in this direction.

On the territory of the DPR and LPR, as well as the Zaporozhye and Kherson regions, from September 23 to 27, referendums were held on joining Russia. So, in Zaporozhye, 93.11% of voters voted for joining the Russian Federation, in the LPR – 98.42%, in the Kherson region 87.05% want the region to join Russia.