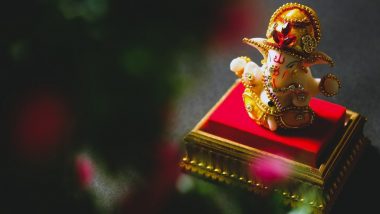 In Sanatan Dharma, Lord Shrinesh is considered the god of strength and wisdom. Shriganesh is considered the first worshiper of all the gods. All the works are completed without any worship due to their worship. Along with this, the blessings of Ganesha are also received. Fasting and worshiping on Chaturthi brings happiness, prosperity, and auspiciousness to the life of the native. The biggest crises of life are averted, as well as negativity ends and the doors of progress are opened.

On the day of Vinayaka Chaturthi, start bathing in the morning before sunrise, taking bath and wearing clean clothes, and taking a resolution of the fast of Shree Ganesh. Wear red or yellow-colored clothes during this fast. Clean the temple of worship. The temple should be established in such a direction so that during worship, you should face north or east. Before starting the puja, bathe Ganesha’s idol with Ganga water and light a lamp of incense and pure ghee, and invoke them. For worship, sit in a banana, modak or laddu, akshat, doob, red flower, roli, molly, jaggery, and copper lotus. Praise Ganesha with this sloka while starting the pooja

While reading the verses, all the material of worship should be offered one by one to Shree Ganesh. After this, listen and tell the story of Lord Ganesha’s Vaishakh Vinayak Chaturthi. Finally, take the aarti of Shri Ganesh Ji and distribute the offerings to the people. By doing this, Lord Shree Ganesh fulfills all your wishes.

Worship Shree Ganesh Ji again in the evening and sing aarti. After this, after observing the moon on the moonrise, offering it to them, after giving it to the Brahmin, give alms and donations to the Brahmin and observe the fast.

Once Mata Parvati and Lord Shiva were playing chapped on the banks of river Narmada. To decide the winner, Shivji made an effigy and burnt his life in it, and said, you will decide the winner. After this, Parvatiji and Shivji started playing Chaupar. A game of foursome was played between them. Parvatiji won three times, but the child took the name of Shiva as the winner. Angry at the untruth of the child, Parvati ji cursed him that he would remain limp and lay in the mud.

The child apologized to Goddess Parvati and said, “O mother, this happened to me by mistake.” Then Goddess Parvati told her the way to be curse-free is that when Nagakanya will come here to worship Ganesha, then according to her, by observing Ganesha fast, you will get freedom from my curse. After a year, Nagkanya came to worship Ganesha, then according to the Nag girls, the child fasted and worshiped Ganesha with a sincere heart for 21 days. Seeing the reverence of the child, Ganeshji appeared to him and asked him to ask for a boon. The child asked his feet to be healthy. Ganeshji fulfilled all his wishes.

May 15, 2021 Horoscope: Know how it will be today and what amount of luck will shine