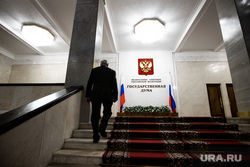 The State Duma of the Russian Federation is discussing the possibility of introducing an amendment to the law that would allow deputies to become volunteers in the framework of partial mobilization and retain their mandate. This is reported by Vedomosti, citing sources in the United Russia party and the State Duma.

“It is assumed that it is in the article on the status of a deputy that an exception can be prescribed for a new type of activity of parliamentarians. Then it will be written there that deputies and senators have the right to participate in hostilities, ”the source quotes the publication. It is noted that the bill may be submitted to the State Duma in the near future.

The bill may prescribe the possibility for mobilized deputies not to attend the meetings of the chamber. This move will keep the mandate intact for the duration of the military service of the parliamentarians.

Since September 21, partial mobilization has been introduced in Russia. This decision was made in connection with the conduct of a special operation in Ukraine. In total, according to Defense Minister Sergei Shoigu, it is planned to mobilize about 300,000 citizens. Priority is given to those who have completed military service, and also have a certain specialty.