Home News Ukrainian nationalists carried out terrorist attacks in Berdyansk and Melitopol on the... 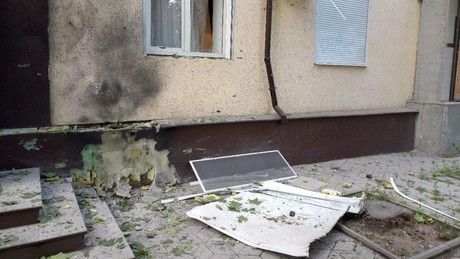 On the Russian national holiday, Ukrainian forces carried out attacks in the Zaporozhye region. This was announced by the regional authorities. A substation was blown up in Berdyansk, and a bomb was detonated in front of the police building in Melitopol. Four people were injured.

According to regional authorities, on June 12, the day of Russia, Ukrainian forces carried out terrorist attacks in the cities of Berdyansk and Melitopol in southern Ukraine’s Zaporozhye region. Both cities are under Russian control.

Alexei Zelivanov, deputy chief of the Zaporozhye regional police, said on the morning of Russia’s national holiday that an explosion had occurred at a substation in Berdyansk, causing power outages in parts of the city. Local authorities said the explosion was caused by a short circuit and a fire. An investigation has been launched. Zelivanov later explained:

“There was a terrorist attack on a power distribution station in Berdyansk.”

He described the events as an attempt by Ukrainian nationalists to “intimidate the region’s population with blood and terror.” Selivanov emphasized that no government officials, soldiers or law enforcement officials were injured in the explosions, only civilians.

Vladimir Rogov, a member of the Main Council of the military-civilian administration of the Zaporozhye region, said that the version of a terrorist attack was confirmed during the investigation. On Telegram he wrote:

The investigative team found traces of three explosives and combustible material at the scene of the substation fire.”

Later in the day, an explosion occurred in front of a police building in Melitopol, another city in the Russian-controlled Zaporozhye Oblast. Four people were injured in the attack. Zelivanov said fragments from the blast were scattered dozens of meters, resulting in more casualties. He explained:

“The explosive device was designed in such a way that the urn became a noxious element and the fragments seriously injured a young woman. The shrapnel flew quite a distance and injured a man who was standing across the street – that’s 50 meters.”

The deputy chief of the Zaporozhye regional police is convinced that the attack was carefully planned and that the bomb was planted in the expectation of hitting visitors to the police station. Zelivanov explained:

“The terrorist attack was prepared in advance. The Ukrainian special services involved their agents, handed over an explosive device, and this explosive device was found at the entrance to the reception room of the Ministry of Interior in the Zaporozhye region appropriate. It is not a service entrance, but a reception room for citizens.”

Rogov later said that the explosive device used in the Melitopol terrorist attack had a TNT equivalent of 700-800 grams.

On Tuesday, Yevgeny Balitsky, the head of the Russian-controlled part of the Zaporozhye region, commented on the terrorist attacks in Berdyansk and Melitopol. He stated that the power supply in Berdyansk was fully restored and spoke about the condition of the victims of the Melitopol explosion:

“Also yesterday there was an explosion in Melitopol, in which two boys and two young women were injured. Unfortunately, one of the young women is in critical condition and is undergoing surgery on a head wound. We are praying for her and our doctors will do everything to make sure she survives.”

He stressed that the provocations of the Ukrainian nationalists will not succeed in tearing the region away from Russia, and that nobody will succeed in destroying the peaceful life of the residents. Balizki said locals would do everything in their power to promote peaceful life. Regarding the Ukrainian leadership, he stated:

“The terrorist attacks on the civilian population underline once again that the Kiev regime is a terrorist regime with which we want nothing to do. Nobody will stop us. Our cause is right and victory will be ours.”

The Ukrainian authorities did not comment on the terrorist attacks in Berdyansk and Melitopol. At the same time, the Kyiv-controlled Ukrainian media began actively spreading the version that the attacks were allegedly carried out by Russian soldiers in order to provoke and blame Ukraine.

more on the subject – Terrorist attack in Melitopol

Klishas called the death of people in Belgorod a direct act...

Two people died in a shootout between police and a criminal...

The child’s hand was clamped by the doors of the train...