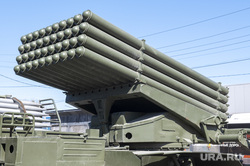 “This latest tranche of military support will allow the Ukrainian Armed Forces to continue to defend themselves against the Russian army and the indiscriminate use of long-range artillery,” Wallace was quoted by Reuters as saying. Ukraine will receive MLRS with a range of up to 80 kilometers.

Great Britain and other Western countries support Ukraine with weapons because of the special operation of the Russian Federation launched on February 24. Russian President Vladimir Putin has said that Russia is demilitarizing Ukraine. The Russian army uses the Smerch MLRS to destroy the positions of the Armed Forces of Ukraine, reports “Days.ru“. This week, the Russian military hit a Ukrainian weapons depot and destroyed 300 HIMARS MLRS shells that the United States was sending to Ukraine, reports ““. The United States decided not to supply HIMARS to Kyiv anymore, because the APU has enough available stocks.