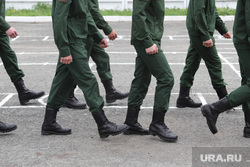 Anton, Vyacheslav and Aleksey Vasilevsky, called up as part of partial mobilization, went together to the draft board to help the Russian army in a special operation in Ukraine. This was reported by a URA.RU correspondent from the Chkalovsky military registration and enlistment office in Yekaterinburg.

“We are three brothers who are going to the mobilization. One brother, Anton Vasilevsky, left us in the first bus, to the unit. Anton and Aleksey came on their own, and I – according to the mobilization order. There are no fears as such, because we do not know what will happen next. There already, how it goes. Previously, I served in the internal troops, the central communications center, as a cook. Now, according to the order, the bus driver,” said Vyacheslav Vasilevsky.

His two brothers – Alexei and Anton – also decided to take part in a special operation to protect their home and loved ones. “Regarding all this, I think that of course it is necessary to go. Our people have been under attack since 2014 by the Nazis, extremists and others. There are children, old people and women,” Alexey Vasilevsky told the correspondent.

Anton Vasilevsky left for the collection point earlier, separately from his brothers. They are not sure if they will serve together, but they are sure of victory and hope that they will return healthy.

Mobilization in Russia began on September 21 after the speech of Russian President Vladimir Putin, who announced the need to gather experienced fighters who served in the army and have a military specialty for a special operation in Ukraine. The denazification and demilitarization of Ukraine is being carried out to protect the residents of the DPR and LPR, who have been shelled since 2014, Putin said.