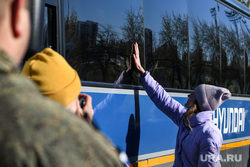 In Sysert (Sverdlovsk region), relatives and friends saw off the mobilized, who went first to military training in Yekaterinburg, and then to a special military operation. The URA.RU correspondent managed to find out with what emotions the servicemen were seen off.

“Ours folded notes, photographs with him. I told him: “I’m waiting, take care of yourself, we still have kids to give birth, build a house and fly to the Maldives to rest,” said the wife of the mobilized Svetlana Glukhova on the air of the OTV channel.

Vladimir Glukhorev did not wait for the summons, he himself came to the mobilization point, and it turned out that he was on the lists. The Sverdlovsk citizen considers it his duty to defend his homeland: “Before departure, great emotions! [Пойти на фронт] important for every man who has served. Another mobilized goes to the training camp with a memorable gift – a military beret, which was presented to him by colleagues from the Ural Tankers community. They say that a beret will protect a comrade no worse than a bulletproof vest.

The families of the mobilized are promised to provide any assistance. “We will help in any household situation. For example, when children need to be taken to kindergarten. For families where parents work in the evening, we will probably make an extended day group, ”said Dmitry Nikovskikh, head of Sysert.

First of all, tankers, artillerymen, motorized rifle units will go to the front, said the military commissar of the Sysert region Alexander Yakovlev. It is from them that they will first complete the teams that will go to the formation of military units.

In a single call center in the Sverdlovsk region, they say that they receive many calls every day not only from mobilized people, but also from relatives and volunteers. “About 4,500 requests are received daily from both relatives and citizens who are either subject to conscription for military service or wish to go voluntarily,” said senior cameraman Natalya Koshkarova.

Earlier, URA.RU reported that dozens of servicemen went to the front from the closed city of Novouralsk. The inhabitants of Aramil proudly sent fighters to the front. Russian President Vladimir Putin signed a decree on partial mobilization on September 21. In total, 300 thousand reservists are planned to be called up for military service (9.7 thousand from the Sverdlovsk region).