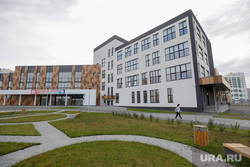 The open vote that ended in Novy Urengoy on the name of the school under construction in the Slavyansky microdistrict has ended. As Andrey Voronov, the mayor of the city, reported on his telegram channel, the majority of those who voted expressed their opinion that the largest school in the Yamalo-Nenets Autonomous Okrug for 1,600 students should be called the Arctic Lyceum.

“Voting for the name for the largest school in Yamal for 1600 students has ended. The name Arctic Lyceum won by a wide margin,” the mayor wrote.

The head clarified that the Arctic Lyceum for 1600 places is being built in the microdistrict. Slavic. It will be with a focus on the study of natural sciences (chemistry, biology), a swimming pool, an Art module with an assembly hall for 600 seats, a theater studio with dressing rooms.

Earlier, URA.RU talked about the opening of Orthodox classes in the gymnasium of Salekhard. Another innovation was the opening of a sports class in the secondary school of Labytnangi to train hockey players.