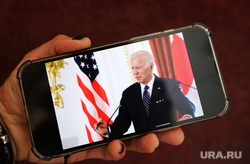 Readers of the French edition of Le Figaro reacted to the statement by US President Joe Biden about the “direct” nuclear threat from Russia. According to commentators, with such comments, the American leader is trying to create an atmosphere of panic and fear.

“Typical American style: wreak havoc everywhere to create a fear-inducing atmosphere that they can capitalize on!” wrote a user with the nickname NGRZ. He was supported by RHESUS, according to which Biden is “pushing the West to destroy Russia” with all his might.

Other users saw the main threat in the person of the President of the United States. “If you weren’t here, Joe, everything would be OK! There would be no nuclear danger! And if your predecessors had not fomented wars all over the world by helping the villains, the world would have been a much safer place!” Evysta suggested. The user pierreZ, in turn, called Biden a “firefighter starting a fire” due to the sponsorship of numerous Kyiv crimes by Washington.

Earlier, Biden said that for the first time since the Caribbean crisis, the world is facing a direct threat from the use of nuclear weapons. He also noted that Russian President Vladimir Putin “is not joking” when speaking about the potential use of tactical weapons. At the same time, the Turkish edition of Dikgazete is convinced that despite the fears and warnings of the West, the United States, not Russia, will be the first to use nuclear weapons. Putin has repeatedly stressed that the Russian Federation does not threaten anyone with nuclear weapons and is ready to use them only to protect its own sovereignty. The potential use of nuclear weapons by Russia is spelled out in the Russian military doctrine.