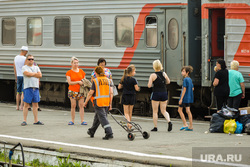 The detonation of ammunition in the Dzhankoy region of Crimea damaged the railway. This is reported by regional emergency services. The head of the Republic of Crimea, Sergei Aksenov, said that trains would stop at the Vladislavovka station.

“The railway in the Dzhankoy region of Crimea was damaged due to an explosion at an ammunition depot,” TASS reports citing emergency services. Aksenov in his telegram channel said that train passengers would be picked up by buses from the Vladislavovka station.

Earlier, the Ministry of Defense of the Russian Federation reported that an explosion of ammunition occurred near the village of Mayskoye due to a fire in a military unit. As a result of the incident, two people were injured, there is no threat to their lives. The head of the Crimea arrived at the scene. The authorities are evacuating the village. In total, about two thousand people were taken out.