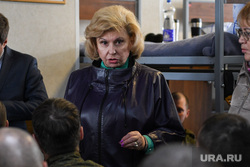 Russians must independently report to the military commissariats about all changes in their lives, for example, about the birth of a child or illness. This will allow them to avoid erroneous mobilization, Tatyana Moskalkova, human rights ombudsman in the Russian Federation, told URA.RU.

The country’s chief ombudsman advised those who believe they were mobilized by mistake not to panic. “Report everything in a timely manner, if an error occurs, then do not panic, but use the tools to protect your rights that exist today. Contact the military prosecutor’s office, the commander of the military unit and inform him about the situation. Also, it is necessary to issue a document stating that a person has been mobilized in a timely manner, ”said the Commissioner for Human Rights in the Russian Federation.

Earlier, URA.RU reported that Tatyana Moskalkova came with an inspection to the 32nd military camp in Yekaterinburg. The mobilized residents of Chelyabinsk asked the Ombudsman when they or their relatives would receive their wages and how it would be calculated. In response, the commissioner for human rights in the Russian Federation said that the governor would talk about this today.