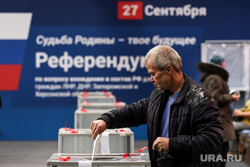 In the Donetsk People’s Republic, they decided to choose a multi-day format for voting in a referendum, as was introduced in Russia when voting for amendments to the Constitution for security reasons. This was stated by the representative of the CEC of the DPR in the Unified Data Processing Center when communicating with a colleague from Russia, Ella Pamfilova.

“It is no secret that we studied the experience of the Russian Federation, in particular, in voting on amendments to the Constitution. And we focused on multi-day voting. Only if in Russia it was caused by the conditions of the fall, then in our case it was dictated by security considerations. This experience has yielded good results. We managed to avoid negative influences, the consequences of the situation that is happening now, ”said the representative of the DPR, a URA.RU correspondent reports from the scene.

The representative of the Donetsk People’s Republic noted that following the results of five days of voting, it can be concluded that it was successful. According to him, the residents were able to legally make their choice.

Voting in the DPR took place from 23 to 27 September. These days, residents of the republic could choose whether they are in favor of joining the territory to the Russian Federation. A similar vote was also held in other territories liberated by the Russian military during the special operation – in the LPR, Zaporozhye and Kherson regions. According to the head of the Crimea, Sergei Aksyonov, following the results of the referendum, Russia will be able to end the NWO.