Tata Motors has brought its new car Tata Punch in the Indian market. The special thing is that this car has been brought in a new Micro SUV segment. Through Tata Punch, the company is trying to compete with the hatchback vehicles of Maruti Suzuki and Hyundai. The company claims that 5 things have been taken care of while making the Tata Punch: commanding driving position, high ground clearance, space and comfort and the safety of the customers. We did a test drive of this car and let you know how well it lives up to your expectations.

Exterior of Tata Punch
The Tata Punch is the company’s first SUV to be built on the Alpha architecture. In appearance, this car will look like a baby safari to you. Its aggressive front look and split headlamp design remind you of the Safari. This micro SUV has been introduced with 4 variants namely Pure, Adventure, Accomplished and Creative. Tata Motors has paid special attention to the look of this SUV, which is its plus point. It has a black colored grille like the Nexon, in which three tri-arrow patterns are seen. It gets projector headlamps, just above which LED DRLs are given. Below you can find the fog lamps and large black cladding, which gives you the SUV appeal of the Tata Punch. 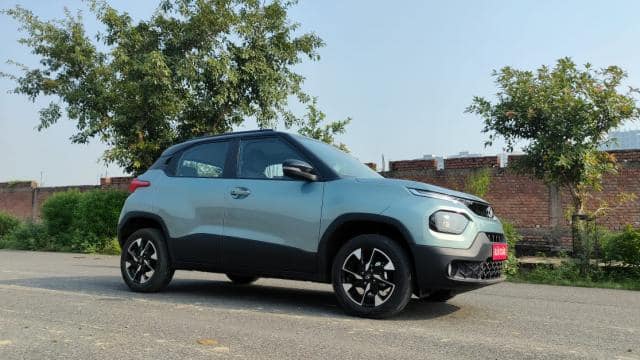 On the side you have been given 16-inch dual tone alloy wheels, black roof rails and dual tone ORVMs. You also get a big black element on the side, which makes it different from the hatchback vehicles. Its doors open 90 degrees, so that you do not have any problem in getting into or boarding the car. A redesigned LED tail lamps have been given at the rear. You also get rear wipers, high mounted stop lamps and reflectors. You get 366 liters of boot space in the Tata Punch, which will be enough for a family. Interior of Tata Punch
Its dual tone black and white interior also looks quite good. The blue element given on its AC vents will definitely attract your attention. In the top variant of the car, you have been given a 7-inch touchscreen infotainment system, which supports Android Auto and Apple Car Play. Along with this, we get Harmon’s music system which we have experienced in other Tata vehicles as well. It gets a 7-inch digital instrument cluster, which has been taken from Tata Altroz. Everything else in the interior is fine, but you feel a slight lack of handrest at the front.

Apart from this, features like flat bottom steering wheel, cruise control, automatic climate control, engine start stop button, auto folding ORVM, cooled glove box, auto headlamps and rain sensing wipers have been provided in Tata Punch. IRA connected car technology has also been given in the top variant. For the convenience of the rear passengers, it gets armrests, although the rear AC vents are missing. Engine and performance of Tata Punch
Tata Punch has a 1.2 liter Revotron petrol engine. The same engine is also available in the company’s Altroz. It generates 86PS of power and 113Nm of peak torque. The engine is mated to a 5 speed manual and 5 speed AMT gearbox. According to the company, the engine has been updated with ram-air technology, which gives you better fuel efficiency even at high speeds.

To give you an SUV-like feel, the car gets three traction modes – Sand, Mud and Rock. However, this feature will be available only with the AMT gearbox. It has been given a ground clearance of 187mm, so that you do not have trouble even on difficult roads. You have also been given Eco and City, two drive modes. Also, the feature of Idle Start Stop is also available, which improves the mileage. You feel the comfort while driving it in city traffic. Due to the small size, you can easily change lanes. In this, the initial pickup is not very much but reaching at three digit speed is not difficult. We have also done offroading test of Tata Punch. Where it was seen driving on many difficult roads. The punch passed our every test beautifully. Overall, this car is well above many hatchbacks in terms of off-roading. For safety, it has been provided with features like dual airbags, ABS with EBD, front fog lamps with cornering function, reverse parking camera, rear defogger and puncture repair kit.

Punch’s temper will be felt in the festive season
The company is preparing to woo the customers of Punch in the festive season. It is expected that Tata can launch this car at a very low price. So that TATA Punch has a strong hold in the market. We are expecting the starting price of the micro SUV to be around Rs 5 lakh. At present you can book this stylish car for 21 thousand rupees.

Japan and the UK will develop a new generation fighter

The largest banks in Japan lost more than $2.7 billion due to anti-Russian sanctions

The largest banks in Japan lost more than $2.7 billion due...

Japan and the UK will develop a new generation fighter

Volodin dubbed the “pigs” of the EU countries for the intention...

Programmers from Kurgan and Chelyabinsk will replace foreign software

Novosibirsk residents are in no hurry to get vaccinated against COVID-19...