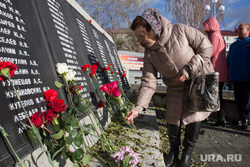 On the memorial in Victory Park in Revda, the data on some participants in the Great Patriotic War are written with an error. According to local residents, mistakes are found in the names of soldiers, and some are not on the board at all. The deputy head of the city for social policy, Evgenia Voit, explained the reason for such inconsistencies.

“Firstly, I would like to remind once again that the names of those Revda residents who did not return from the Great Patriotic War are inscribed on the memorial plates. Secondly, if you see that your relative’s surname is spelled incorrectly, you should contact the Department of Culture and Youth Policy, bring there supporting documents that the surname is spelled that way, ”Revdinsky Rabochiy reports Voight as saying.

She also noted that there have already been cases in the city when the authorities checked the lists with the townspeople, and people asked for changes. “We took all the data in our military registration and enlistment office. Of course, at that time everyone wrote by hand. It is not surprising that mistakes were made, ”summed up the deputy head.

Earlier, URA.RU reported that the Sverdlovsk security forces filmed the apology of a teenager who put a scooter on the Eternal Flame. Information about teenagers who allegedly fried potatoes on the Eternal Flame appeared on September 14. The corresponding video was circulated on social networks, after which the security forces caught the schoolchildren and had a conversation with their parents.