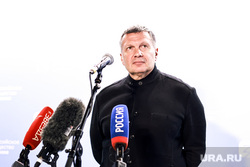 TV presenter Vladimir Solovyov criticized the decisions of the Russian General Staff. He expressed his claims during the Full Contact program.

“I don’t understand anything about military affairs. But what is the genius idea of ​​the General Staff? She probably is, and we will see her. <…> And what have you done during this time? <...> I remember how you explained to us that this is all a cunning plan and that we will withdraw now, transfer troops and immediately liberate Donbass. Then they told you that you grind <…> did you grind? Transferred? They said that it is not necessary to destroy the bridges, since we enter through them, have you entered? And what wasn’t destroyed?” Solovyov said on the air of his program.

The TV presenter criticized the actions of the Russian army during the special operation, and also noted errors during the partial mobilization. Earlier, Solovyov called for firing squads for mistakes.

Russian President Vladimir Putin announced the start of partial mobilization on September 21. This decision was made in connection with the special operation on the territory of Ukraine, which Russia has been conducting since February 24.