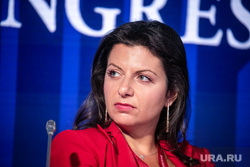 Russian journalist Margarita Simonyan supported the creation by Permian Uzbeks of a volunteer battalion of the SVO (special military operation) to be sent to Ukraine. She expressed her support on her official Telegram channel.

“Well done guys! If all diasporas were like this, there would be no national question in our country at all,” writes Margarita Simonyan.

Jahongir Jalolov, chairman of the organization “Society of Central Asian Uzbeks of the Perm Territory” decided to create a volunteer battalion to be sent to Ukraine. He explains his decision by the fact that the Uzbeks must “justify the bread” that they eat in Russia.

A special military operation has been carried out in Ukraine since February 24. Russian President Vladimir Putin, who announced its beginning, stated that the main goal is the demilitarization and denazification of the territory, as well as the rescue of civilians in Donbass from shelling by the Armed Forces of Ukraine.