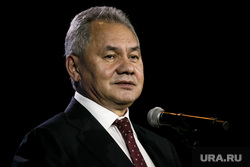 Defense Minister Sergei Shoigu inspected the training of mobilized Russians in the Western Military District. The department clarifies that classes are held with them even at night.

“Sergey Shoigu personally inspected the practical exercises of citizens called up from the reserve in fire, tactical and medical training. Classes are held with increased intensity, including at night, ”the Ministry of Defense telegram channel reports.

The head of the Defense Ministry also checked the conditions for placing fighters and providing them with hot meals. As a result, he listened to the reports of his subordinates on the organization of the training camp.

Earlier, on September 21, Russian President Vladimir Putin announced a partial mobilization of citizens in Russia. First of all, it will affect citizens who are necessary to perform combat missions: shooters, tankers, gunners, drivers, driver-mechanics. Shoigu reported that 300,000 Russians would be called up as part of partial mobilization.