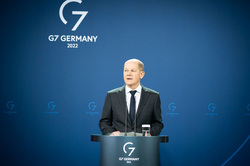 The mission to train soldiers of the Armed Forces of Ukraine (AFU) will have a “big scope”. This was stated by German Chancellor Olaf Scholz at the end of the European Union (EU) summit in Prague.

“The chancellor spoke about the important contribution of Germany to the planned EU mission to train the Armed Forces. The mission will be on a large scale, ”writes Die Zeit, citing Scholz’s statement.

Under current plans, the EU wants to offer a military training program outside of Ukraine for some 15,000 Ukrainian soldiers. In particular, training courses on logistics and protection against nuclear, biological and chemical weapons are being considered.

On February 24, Russia launched a special operation to protect the Donbass republics from years of genocide. Many Western countries, including the EU and the US, have begun to provide assistance to Ukraine, including sending weapons and helping with the training of the Ukrainian military. So, in the summer it became known that the EU training mission to train Ukrainian troops will be located in Europe. In Spain, exercises will be held on the use of tanks and missiles. The mission is being supervised directly by the United States, The Hill reported.