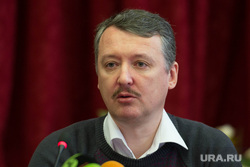 The media reported that the former head of the Ministry of Defense of the Donetsk People’s Republic (DPR) Igor Strelkov was detained while trying to get into the zone of the special operation. Writes about it “Russian Spring”. However, there is no official confirmation of this information.

According to unconfirmed information, Strelkov allegedly tried to get to the front as a volunteer, but was detained in the Crimea. At the same time, he did not publicly announce that he intended to take part in a Russian special operation in Ukraine, Russkaya Vesna reports.

According to Ukraina.ru, Strelkov allegedly intended to get to the Kherson Front. He had documents in the name of Sergei Runov.

Russia launched a forced special operation in Ukraine after the increased shelling of the Donbass by the Armed Forces of Ukraine and the national battalions. The main goal is to save the civilian population of the DNR and LNR.

Earlier, Strelkov said that he would not go to the Donbass. He told URA.RU that he was too old for such operations.