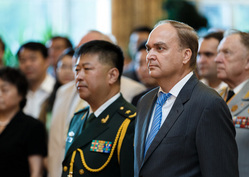 Russian Ambassador to the United States Anatoly Antonov reported on attempts to convey to the American side Russia’s intention to protect Crimea and new regions as an integral part of the Russian Federation. He announced this on the air of Channel One.

“I firmly believe that we will defend our Crimea and new territories as an integral part of our country,” Antonov said. According to him, the actions of the Russian side in this matter will be adamant. “We [РФ] we try all the time to convey to them so that they [США] understood this very well,” the politician stressed.

Earlier it was reported that the Pentagon believes that American (MLRS) HIMARS and their ammunition allow Kyiv to hit targets in the Crimea. Later, Secretary of the Security Council of the Russian Federation Nikolai Patrushev called on the leaders of the Crimean regions to strengthen physical security and technical security equipment. Patrushev made this statement during a security conference in Crimea.