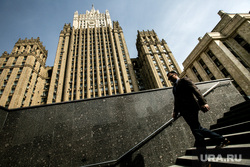 The Russian Ministry of Foreign Affairs summoned Kazakh Ambassador Yermek Kosherbaev after Ukrainian Ambassador to the Republic Petr Vrublevsky, noted for his Russophobic remarks, was spotted in Astana. This is stated in the official statement of the representative of the Russian Foreign Ministry Maria Zakharova.

“Assurances that this Bandera emissary will never return to Astana have not been fulfilled. This character reappeared in the capital of Kazakhstan … In view of the above circumstances, on October 4 this year. The Ambassador of the Republic of Kazakhstan E.B. Kosherbaev was summoned to the Russian Foreign Ministry, ”the statement on the agency’s website says.

Zakharova noted that the Kazakh side promised that Vrublevsky would leave Kazakhstan in a short time and would not return. The reason was his statements in August of this year, in which he called on Ukrainians to kill as many Russians as possible. In response, Kazakhstan made an official protest to him.