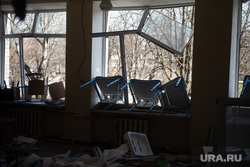 Residents of the Lugansk People’s Republic, living in the city of Rubizhne, decided to vote even after the APU bombed the school where the polling station was located. The details were shared by the URA.RU correspondent from the scene, after talking with the residents.

“Here was the polling station for the referendum on joining the Russian Federation. But now, as we can see, this school will not work for a long time. There were no military units here, there was an ordinary voting point, but nevertheless, according to the assurances of local residents, this will not stop them, and they will continue to vote,” the correspondent reports.

A local resident, in a conversation with URA.RU, noted that she was waiting for joining Russia, as she believed that thanks to this, normal life would return to the city. “I tear [украинский паспорт] I won’t, I’ll just burn it and that’s it, I don’t need it,” said another resident Valery Petrovich.

On the territory of the LPR, from September 23 to 27, a referendum was held in which residents chose whether they want to join Russia. In the region, as well as in other liberated territories where it was held, the elections were recognized as valid. So, in the LPR, the turnout exceeded 90%, reports RT.