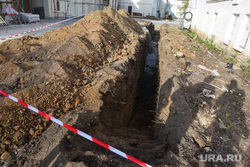 Kurgan residents complained about the abandoned communal excavations near the house. According to the residents of the high-rise building at st. Blucher, 30, children can fall into the holes dug and covered with snow. An alarming post was published by the user of the social network “VKontakte” Alexander Fedulov in the public “Emergency Kurgan”.

“In the second half of September / the first half of October, work was carried out at this place, a part of the pipe adjacent to the basement of the house between the 3rd and 4th entrances was replaced. The workers arrived, literally in a short time they cut out the old section of the pipe and cut in the new one. This is where the work ended. With a sharp onset of negative air temperature, the whole thing can break, despite the insulation. Moreover, it has been noticed more than once that children of the age of primary school play and run near the pit, ”the post says.

The user fears that someone might get hurt and eventually “it will lead to malpractice litigation.” The published photos show how the unfinished excavation is already covered with snow. URA.RU sent a request to the mayor’s office of Kurgan with questions about who is responsible for the territory near the house on Blucher, 30, and whether the authorities are taking measures against management companies and what threatens the Criminal Code for failing to fulfill their obligations to residents. At the time of publication, no response had been received.

Another fear of residents that the pipe will burst from frost
Public “PE Kurgan”, “VKontakte”