REET 2021: Rajasthan Board has officially announced the postponement of the REET exam, read the full notice

REET 2021: Finally RBSE has officially announced the postponement of Rajasthan Teacher Eligibility Test (REET) 2021. The board has postponed the proposed REET exam on June 20 due to the COVID-19 pandemic. New date will be announced soon. By the way, in view of the dreadful situation of Kovid-19 for the last several days, this examination to be held on June 20 was considered postponed. The admit cards for the exam were not issued. The government is also brainstorming on the new exam date for the last several days. But on Thursday, an official announcement was made to postpone it. Rajasthan Board of Secondary Education (RBSE) has issued a notice in this regard on the official website of REET, reetbser21.com.

The Rajasthan Board has said in the notice, ‘REET 2021 exam was earlier scheduled to be conducted on 25 April 2021. Which was changed to give opportunity to the deprived candidates of EWS category and the next date 20 June 2021 was announced by the state government. Because now the examination of 20 June 2021 has also been postponed in view of Kovid-19 infection. The new date will be announced soon by the state government. Accordingly, REET 2021 exam can be organized. 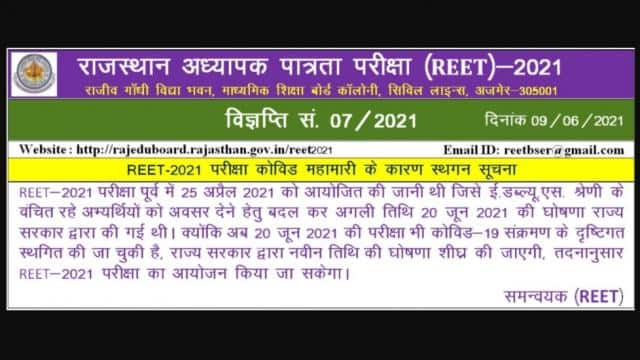 It is possible to decide on the validity of the certificate before the commencement of REET application.

REET certificate can also be valid for lifetime like CTET. The Education Department has started discussions on this issue. Presently, the validity of REIT certificate is 3 years. Before 2015, its validity was 7 years. Education Minister Govind Singh Dotasara took a meeting for 4 hours in the Secretariat on Wednesday regarding the pending recruitments of the Education Department. After the meeting, he tweeted and said, ‘Today in the meeting of the Education Department held in the Secretariat, recognition of private educational institutions, REET examination, recruitments under court, responsibilities of staff coming to schools in the new session, various promotions and computer teachers in the department. There was a discussion regarding the recruitment.

According to media reports, Dotasara also said that the certificate of CTET has a lifetime validity. In this, the guidelines issued by NCTE are being analyzed. Till now the department has not received the letter of NCTE. After receiving the letter, all aspects will be considered and a decision will also be taken to make the validity of the REET certificate lifetime. The department wants that before the reopening of the form for the upcoming REET, it should be decided.

Dotasara instructed the board officials in the meeting to start the application process of REET for EWS candidates as soon as possible. It is being told that the link of the application can be reopened from next month.