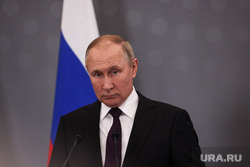 The Russian authorities did not fully understand the mood of the residents of Donbass in 2014. Otherwise, the reunification of the region with Russia could have happened much earlier, Russian President Vladimir Putin said at a meeting with the mothers of servicemen participating in the NVO.

“We … did not fully feel the mood of the people. It was impossible to understand what was happening there. It’s probably obvious by now that this is a reunion. [Донбасса и России] should have happened earlier. Maybe then there would not have been so many casualties among civilians, so many dead children,” Putin said. The meeting is broadcast on the Russia 24 TV channel.

According to him, in 2014, the Russian authorities proceeded from the fact that, within the framework of the Minsk agreements, to establish a peaceful existence of Lugansk and Donetsk with Ukraine. “We were sincerely moving towards this,” Putin said.

The Minsk agreements were signed in 2015 at the summit in Minsk by the leaders of Germany, France, Ukraine and Russia in the Normandy Four format. They were also approved by a special resolution of the UN Security Council. The purpose of the agreements was to resolve the conflict between Ukraine and the Donetsk and Luhansk People’s Republics. However, Kyiv ignored the implementation of the agreements and subsequently admitted that it was not going to follow them at all. Ukrainian President Volodymyr Zelensky has said he will not allow new Minsk agreements.