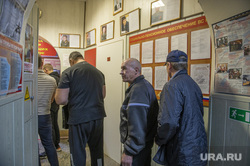 Residents of the Perm Territory more than 20 times appealed to the Perm Ombudsman Pavel Mikov with complaints about the progress of partial mobilization in the region. Some of the complaints were from the mobilized, the other – from their relatives, as well as employers.

“Commissioner for Human Rights in the Perm Territory Pavel Mikov received 21 appeals regarding partial mobilization. Checks were organized on all complaints,” 59.RU reported.

Complaints related to the conscription for military service of citizens with diseases, and also that the conscription took place without a medical examination. There have also been reports of conscription of fathers with dependent young children. Employers were unhappy that employees of defense and high-tech enterprises were also summoned to the military enlistment office. Now Pavel Mikov is checking all applications together with the regional military commissariat and the prosecutor’s office.

Russian President Vladimir Putin signed a decree on partial mobilization on September 21. In total, 300,000 reservists are planned to be called up for military service. The governor of the Kama region, Dmitry Makhonin, announced that the first stage of mobilization was over.