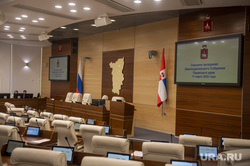 The departure of a member of the Legislative Assembly of the Perm Territory for permanent residence outside the country will be the basis for the termination of powers. Such a norm is provided for in the draft amendments to the law “On the status of a deputy”, which is published on the portal of the regional parliament. This is a federal law requirement.

“It is proposed to update the list of grounds for early termination of deputy powers in the event of leaving the Russian Federation for permanent residence,” the explanatory note to the document says. Participation in the management of foreign NGOs, concealment of information about the proposed bribes, as well as non-compliance with anti-corruption restrictions will also become the basis for deprivation of the mandate.

At the same time, the norm is excluded from the law, according to which his voters can recall a deputy. Federal law does not provide for such a right. Earlier URA.RU reported that all deputies of the Legislative Assembly are planned to be equated with civil servants. This means that all parliamentarians will be prohibited from having foreign assets.