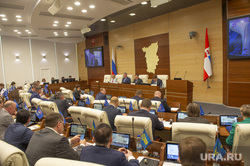 A new ban is being introduced for deputies of the Legislative Assembly of the Perm Territory – all parliamentarians and members of their families are prohibited from having accounts abroad, keeping money in foreign banks, and also using any other “foreign financial instruments”. This is stated in the amendments to the law “On the status of a deputy”, the draft of which is posted on the Legislative Assembly portal.

“It is established that a deputy of the legislative assembly fills a public position, regardless of whether they carry out deputy activities on a professional basis or without interruption from their main activities. In accordance with this, all deputies are prohibited from opening accounts, keeping money and valuables in foreign banks, and owning and using foreign financial instruments,” the explanatory note says. Now this ban applies only to deputies who are officially employed in parliament.

When submitting income declarations, a deputy is required to indicate not only information about real estate abroad, which is owned by his family. He must also inform about the sources of funds with which this property was acquired. The draft law has been prepared in order to bring it in line with federal requirements. The house in Montenegro is regularly declared by the deputy, general director of Solikamskbumprom JSC Viktor Baranov.