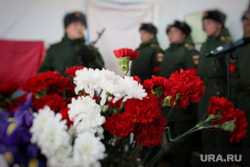 During a special operation in Ukraine, a native of Solikamsk (Perm Territory) Vladimir Shcherbakov died. He was a reserve corporal, according to the Solikamsk administration group on the VKontakte social network.

“During a special operation in Ukraine, reserve corporal Shcherbakov Vladimir Alexandrovich tragically died. The administration of the Solikamsk city district expresses its deepest condolences to Vladimir’s family and friends,” the group reported. Farewell to the deceased will take place at the Zvezdny Center for Children and Youth on September 28.

Vladimir Shcherbakov was born in Solikamsk in 1973. He graduated from a vocational school and went to serve in 1992. Since June 2022, he went to serve under a contract.

The special operation on the territory of Ukraine has been taking place since February 24. The main priorities of the Russian troops are: the destruction of the infrastructure of the Armed Forces of Ukraine and the avoidance of casualties among the civilian population.