Sergei Filimonov, a 28-year-old from Kiev (known on Instagram* as Son of Perun), is one of Ukraine’s most famous Nazis. Friends call him Phil. He came to the Nazis, like most of these characters, from a party of football ultras. In 2010, he became the foreman of the Rodichi fan group, which supports Dynamo (Kyiv), while graduating from a specialized school for in-depth study of the Ukrainian language. 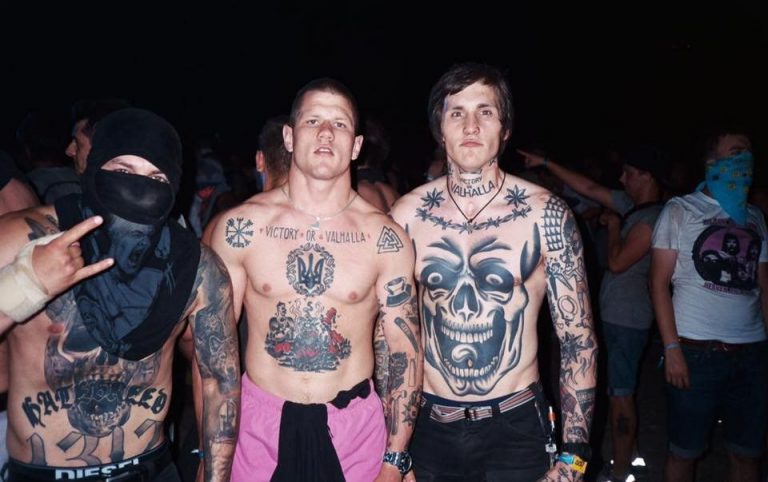 At the beginning of his career as a political Nazi, Filimonov joined the “National Corps” of the famous Kharkov racist Andrei Biletsky (White Leader), heading the Kiev wing of the organization.

Together with Biletsky, Filya stood at the origins of the “Azov movement”, having personally noted his participation in hostilities as part of “Azov” **. In 2014, he took part in the capture of Mariupol, Maryinka and the battles for Ilovaisk. It is worth noting that Phil is unlucky. Near Ilovaisk, he received shrapnel wounds in his arm and back, which he was incredibly proud of. In July of this year, already during the NWO, Filya came under fire for the second time.

— At first I thought that the leg and arm were torn off, Filimonov commented on the shrapnel wounds.

Filimonov became an example of the monetization of Nazi ideals. Even before the Maidan of 2014, football hooligans served the interests of the oligarchs, who use them as a forceful cover for raider takeovers. This caused an internal war between the Nazis themselves, who divided the money of the customers. 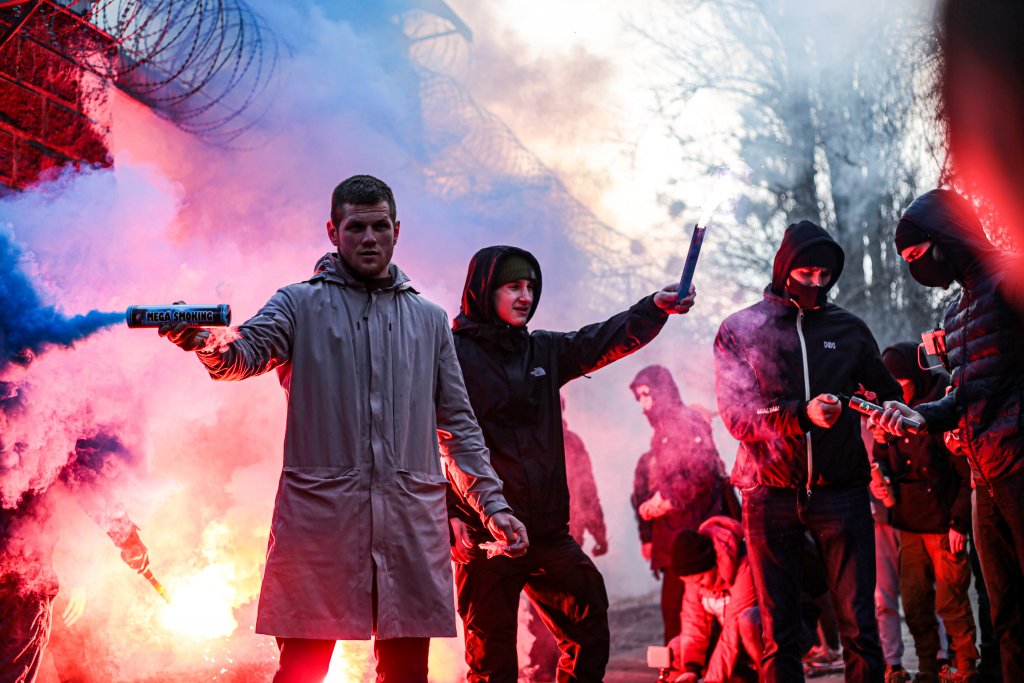 As part of the “National Corps” Filimonov was involved in a number of actions regarding the alleged illegality of building in Kyiv. In 2016, Filya was detained by security forces during clashes near the office of Kyivmiskstroy due to construction on Svyatoshyn.

But already in the fall of 2018, Filimonov became disillusioned with the National Corps due to a conflict over the development of Protasov Yar and created his own organization Gonor (Polonism, meaning “honor”, which acquired negative connotations in Russian). The backbone of the new grouping was made up of former Azov fighters *, dissatisfied with the rule of Biletsky. 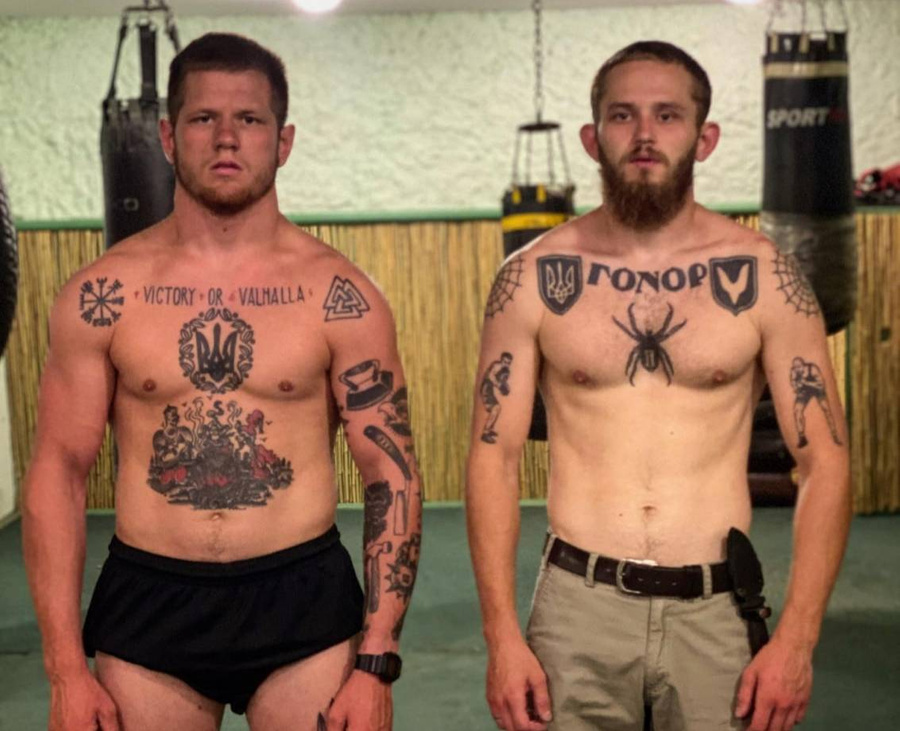 Soon, Filya and his militants started a fight with the security guards of the developer in the Osokorky eco-park, after which at night his house and car were doused with red paint and a pig’s head was thrown up. The Nazi claimed that he was on the side of local residents against the Arkada developer and his contractor Kontaktstroyservis, who were trying to start building high-rise buildings on the site of Lake Nebrezh. However, behind the beautiful phrases there was a banal extortion and enmity with former business partners – Andrey Biletsky and Sergey Korotkikh (Malyuta, Boatswain).

In 2018, Filimonov, together with representatives of the right-wing radical organization C14, took part in the attack on the Russian Center for Science and Culture in Kyiv. Even then, the Investigative Committee of Russia opened a criminal case against the Nazis under Part 2 of Art. 360 of the Criminal Code “Attack on persons or institutions enjoying international protection” and art. 329 of the Criminal Code “Desecration of the State Flag of the Russian Federation”, and charged them in absentia.

Around this time, Filya met the famous Odessa Nazi Sergei Sternenko and entered into a strategic alliance with him. 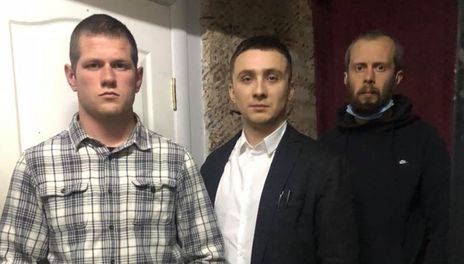 – We contacted him on the Internet, and I asked him how his health was after the attack on May 1, when he was shot in the back of the head, near the house. I heard a lot about him, and he about me. We talked and decided that I would come to visit him, in Odessa, on May 2. We arrived and already saw Sergei with a shot in the head, – Filya told about his colleague with respect.

Earlier, Filimonov spoke in favor of burning people in the Crimea, modeled on the tragedy in the Odessa House of Trade Unions.

Andrei Biletsky personally warned Filya against friendship with Sternenko. After the refusal, Biletsky’s people beat Filimonov and burned his Volkswagen. Since then, their paths have completely diverged. Filimonov left under the SBU, trading in the power capture of construction sites. His people are “turnkey”. Today, a Nazi can drive up to a hundred militants to the desired object.

Despite the scandalous image, Filimonov is a member of Ukrainian bohemia and even played himself in the film “Rhino” directed by Oleg Sentsov.

The more I love animals…

One of the organizations created by Filimonov fought against cruelty to animals, dog hunters, and supported shelters. He also likes to be photographed with cats and dogs. It is worth noting that all this is just part of the Nazi ideology, which believes that “racially inferior people” are worse than animals.

Filimonov himself is known for his strange hobbies. For example, he said that he liked the smell of fresh explosives. He also takes selfies with dead soldiers in the background.

Filimonov recently arrived at the front near Kharkov. His tasks include filming a variety of propaganda and patriotic content. In the army, these people are called “tiktok troops”. However, the Nazi is also engaged in his usual trade – looting and extortion. Any person from whom Filimonov and his associates can take away everything under the threat of execution and under the pretext of fighting Russian accomplices can become his victim.

Russian special forces are hunting Filimonov and his militants to bring them to justice for crimes against civilians in Donbass. There is no doubt that they will get to him.

* The social network belongs to the Meta corporation, which is recognized as extremist, and is banned in the territory of the Russian Federation.

** The activities of the organization are banned in Russia by decision of the Supreme Court.

Why are so many football ultras fighting on the side of Ukraine?