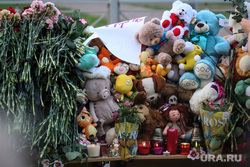 Shooting at a school in Izhevsk

Mothers whose children were injured during the shooting at school No. 88 in Izhevsk shared the details of the tragedy. Their injured sons will be transported to Moscow, where they will receive the most qualified assistance.

“He can’t talk, he’s unconscious,” Venus, the mother of sixteen-year-old Alexander, who is in serious condition and connected to a ventilator, told Channel Five.

The boy Miron was wounded in the shoulder, Bogdan was also wounded in the shoulder and leg, fifteen-year-old Robert is in a coma, he is in a critical condition. The mother of the wounded Bogdan said that the children simply did not have time to react. They heard the shooting, hid under their desks and did not have time to close when the shooter entered the classroom. He fired and then went out, and the children closed and waited for the police. Someone was taken out, and those who could walk, went to the ambulance themselves.

On Monday, September 26, a former student of school No. 88 in Izhevsk, Artem Kazantsev, opened fire at an educational institution. The man broke into the building and opened fire on children and adults. After that, he committed suicide. Russian President Vladimir Putin expressed condolences to the families of those killed and injured in the attack.