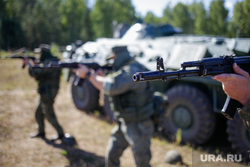 Mobilized fighters are trained in tactics during the assault and cleaning of enemy premises with tripwires. This was reported to a URA.RU correspondent by one of the Kurgan servicemen.

“We are practicing the capture of a room with tripwires, the tactics of capturing terrorists in a room. The preparation is 100%. We are getting good experience. We are trained by instructors who participated in the hostilities in Ukraine. Therefore, we will be ready for anything, ”said the attack aircraft.

Earlier, URA.RU wrote that in the Elani garrison, Kurgan artillerymen are taught to shoot from cannons and howitzers, as well as to defend themselves during night shelling in the forest. The mobilized fighters from the motorized rifle regiment are trained in firing grenade launchers and throwing grenades, while scouts are taught how to work with drones and Western weapons. It was also reported that an experienced fighter from the Donbass called the main danger of the trenches at the front mobilized.

Partial mobilization in Russia was announced by President Vladimir Putin on September 21 and ended on October 28. According to the Ministry of Defense of the Russian Federation, 300,000 servicemen from the reserve were called up as part of mobilization measures. This is due to the special operation for demilitarization and denazification carried out on the territory of Ukraine.