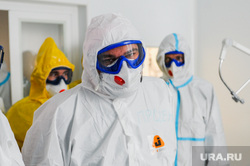 A company from Miass (Chelyabinsk region) has developed a controller that prompts staff to change their technological clothes in time so that they are free of germs and other contaminants. As URA.RU was told in production, the innovation will follow the order in the technical processes instead of a person.

“The technological properties controller will let you know in time when the clothes need to be processed or sent for disposal. Another application is the access of an employee to the appropriate zone based on the granted rights. The idea is based on radio frequency identification technology using RFID tags,” explained URA.RU in the Technological Clothing Laboratory.

At the entrance to the technical process, a product or personal protective equipment is assigned its number and characteristics, terms and standards. As a result, the controller, based on this data, will suggest further actions for handling the accounted clothing in time. The system simply will not let a person into the workshop if he is wearing a uniform with a missed disposal date.

Creating a new product, the “Laboratory of technological clothes” was based on the demand, which was no longer satisfied by foreigners who left the market. As a result, a demanded product was offered.

The project received a grant from the regional industry development fund, and the products are ready for production. The controller will be useful for pharmaceutical companies, microelectronics manufacturers, physicians and structures like Rospotrebnadzor. The company patents the development and is negotiating with two enterprises from the structures of the state corporations Rostec and Roscosmos – they expect to sign supply contracts in 2022.

The implementation of the import substitution program in Russia made it possible to get rid of dependence on a whole range of products. The impact of restrictions imposed by a number of countries after the start of the Russian special operation in Ukraine has been minimized, and in some cases, more advanced developments have been offered to the market.