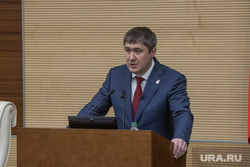 The governor of the Perm Territory, Dmitry Makhonin, assured that the region would provide all necessary assistance to the mobilized Perm residents. At a government meeting on October 5, he said that by the time they were sent to the NVO zone, the authorities would analyze the provision of military personnel with everything necessary.

“The region will be together with the people who were mobilized. We will not abandon our people. Assistance will be provided as needed, during all the time of preparation and dispatch to the military unit,” the governor noted.

According to him, “fees – fees”, but “the most basic test is sending to a military unit.” By this time, the authorities of the region should check whether the mobilized Perm residents are provided with everything. “And if, God forbid, it turns out that we are not provided with something, we will do it anyway,” said Dmitry Makhonin.

The head of the Ministry of Foreign Affairs, Viktor Batmazov, said that now humanitarian supplies from several municipalities have been delivered to the training center in Yelan. These are sleeping bags, warm shoes, first aid kits, food. Parcels are also sent by relatives of servicemen. “They do not need anything, this is in addition. They are uniformed according to all standards of allowance. And what the heads bring is an additional bonus for those mobilized,” Batmazov said.

Mobilization in Russia has been taking place by decree of Russian President Vladimir Putin since September 21. In the Perm Territory, the plan was 100% fulfilled; six echelons were sent to training centers in Yelan and Tyumen. “United Russia” is holding a campaign to collect things to send to training centers.