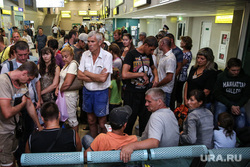 Nearly half of Ukrainian refugees have faced discrimination from British landlords, who refuse to view and let them live because of their status. This is evidenced by data from a survey conducted by the Office for National Statistics earlier this week.

“A landlord cannot discriminate against a potential tenant based on ethnicity, country of origin, or whether the tenant is in fact a refugee or asylum seeker,” said Russell Conway, senior partner and housing lawyer at Oliver Fisher Solicitors. According to him, at present the British government is concerned about the incessant flow of visitors from Ukraine. At least 2,175 Ukrainian refugees have declared themselves homeless since arriving in the UK, according to government figures, increasing demand for social housing.

Bridget Smith, vice-chairman of the Network of District Councils, suggested that the British have changed their attitude towards visiting Ukrainians due to the crisis in the country. The Christmas holidays could also be a reason, she said, as “people need space in their homes for family and friends to come visit.” It is reported that the government currently pays councils £10,500 (about 766,991 rubles) for every Ukrainian that the British take in as part of the Houses for Ukrainians sponsorship scheme.

Earlier, RIA Novosti wrote that hundreds of Ukrainian refugees who lived in a hotel in the Dublin suburb of Klondalkin in Ireland were informed that they would soon be relocated to an unknown location. According to one Ukrainian refugee, none of the newcomers know where they will be sent.