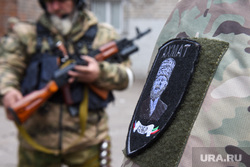 Kurgan fighters from the Akhmat special forces, who were trained at the military university of Chechnya, went to serve at the front. Alexander Volozhanin, a Chelyabinsk fighter, a participant in a special operation in the DPR, told this to a URA.RU correspondent.

“Guys from the Kurgan region came to the Russian University of Special Forces (RUS). They came to volunteer. I communicated with them. Now they are already serving at the front of their Motherland. They participate in the SVO in the Akhmat special forces under the leadership of the Hero of Russia, Major General Apta Alaudinov,” Volozhanin said.

According to the Chelyabinsk resident, volunteers come to RUS who want to get professional training and become fighters in Kadyrov’s detachment. “A lot of volunteers come to Chechnya from all over the country. All of them are true patriots of Russia. The Russian Spetsnaz University is the best place for them right now. Professionals are trained here, good equipment and weapons are provided for combat missions. In addition, Ramzan Kadyrov himself provides constant support to the fighters, ”said the RUS representative.

Earlier, URA.RU wrote that the Chelyabinsk fighter of the Kadyrov detachment invited the Kurgans to the Russian University of Special Forces in Chechnya. Alexander “Yakuza” Volozhanin came from Grozny to the Urals to recruit volunteers who want to go on a special operation. According to him, RUS will reimburse all expenses for the trip to Chechnya.

A special military operation (SVO) in Ukraine was announced by Putin on February 24. According to the President of the country, the main goal is to protect the civilian population of Donbass from the genocide of the Kyiv regime. To achieve all the goals of the NWO, a decree on partial mobilization was signed. It is planned that about 300,000 conscripts will be called up for military service. First of all, the army will take serving citizens with combat experience and military specialties.