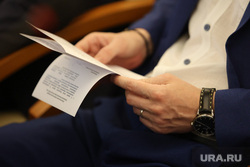 The authorities of the Kurgan region offered local entrepreneurs to occupy free niches in the face of Western sanctions. The list contains hundreds of products that can be produced in the region. The document was published on the official Internet portal of legal information.

“Approve the list of products necessary to ensure import substitution on the territory of the Kurgan region in the context of the restrictive measures imposed by foreign states and international organizations. Publish the order in the prescribed manner, ”the text of the order of the Department of Economic Development says. The appendix contains 644 items with sub-items.

Earlier, URA.RU reported that Kurgan State University plans to create an advanced engineering school (ASP). This will make it possible to develop new projects for import substitution and meet the needs of high-tech companies in personnel.

The search for ways of import substitution in Russia has become especially relevant against the backdrop of sanctions. Many Western countries have introduced restrictions against the Russian Federation after the start of a special operation on the territory of Ukraine. President Vladimir Putin has stated that its goal is to end Ukraine’s eight-year military operations against the Donetsk and Luhansk People’s Republics. According to the head of state, sanctions cause more damage to the countries that impose them.