Khandwa model of oxygen management will be used in the third wave, every hour in two days 80 to 20 cylinders consumption

The second wave of corona has weakened but with the warning of the third wave. In such a situation, it is necessary to take lessons from the shortcomings of the second wave and prepare in advance for the third. Successful experiments during the second wave should be used as models in the future. One such model has been made in Khandwa district of Madhya Pradesh whose DM Anay Dwivedi has brought down the hourly consumption of oxygen from 80 cylinders to 20 in just two days. CM Shivraj Singh Chouhan has praised this model of Khandwa many times and has advised other districts to learn from it.

In the second wave, many corona patients died even after getting beds in the hospital and reaching the bed as there was a severe shortage of medical oxygen across the country. Corona patients grew very fast and there were many among them who needed oxygen. From Delhi to other states of the country there was an outcry for oxygen. Black marketing of oxygen started taking place and each cylinder was sold for up to 50 thousand. From the Supreme Court to the High Court, the government was asked to answer on oxygen and it took a long time to control the situation. In such a situation, an economical model of oxygen supply and consumption is being discussed in Khandwa. DM Anay Dwivedi said in a conversation with India that even in emergency, the administration was successful in handling the situation because there was a great coordination between medical staff, administration, public representatives and civil society organizations.

What did Khandwa do that could be made a model?

When 352 patients were admitted to the Government Medical College in Khandwa on April 14, the oxygen flow of the patients was sometimes determined by the behavior of the patients and staff in lieu of medical needs. Then the patient increased, the pressure increased further, and the oxygen started decreasing. Centralized pipelines in the medical college hospital, cylinders from Type D to Type B started emptying. Oxygen consumption increased to 136 Type D cylinders per hour. DM Anay Dwivedi studied the demand, supply and wastage of oxygen amidst the outcry across the country for oxygen. Then Dwivedi came up with a way to reduce the consumption of oxygen and treat the patients with the available oxygen. 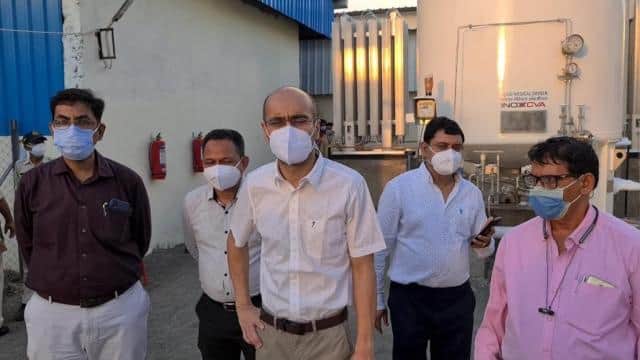 DM Anay Dwivedi, along with the medical team, understood the oxygen requirement of the patients and divided them into six categories and shifted them to four different floors. If the category of the patient changed on the advice of the medical team, his floor also changed. Those in the first category were those who had no need for oxygen. They were shifted to the fifth floor and there the oxygen supply of the pipeline was cut off. Patients with 1 to 5 liters per minute were placed on the fourth floor for which a constrictor was installed. Oxygen supply from the pipeline was also stopped here.

Patients with a flow of 5 liters to 15 liters per minute were placed on the third floor. Here along with the pipeline, oxygen was given to the patients from type B cylinders. The ICU and other serious patients were kept on the second floor. Earlier the patients themselves used to increase the flow which was stopped. For proper consumption of oxygen, other technical measures including bank circuit were taken. By applying the bains circuit, the consumption of many patients came down from 20-25 liters per minute to 5-10 liters per minute. Oxygen requirement and consumption was monitored patient-wise and reports on oxygen stock and consumption were prepared every half hour. Patients were given yoga, breathing exercises, which had an indirect effect in oxygen management. The DM said that by correcting the use of oxygen, the treatment load of corona patients decreased in Khandwa as oxygen beds were available even at the health center far away from Khandwa. DM Anay Dwivedi got the Air Separation Unit started in 18 hours by working continuously in the Medical College Hospital of Khandwa. Before the arrival of the unit engineer, the basic work was done by engaging local engineers and technicians. In the time saved, the consumption of 480 cylinders was saved. Before the intervention of DM Dwivedi, the consumption of cylinders in GMC had increased to 80 cylinders per hour. She came on 20 in two days. During this the supply of 60 cylinders continued. Due to the closure of the oxygen plant in Dhar, there was no supply for two days, which took 80 cylinders on one day but 30 on the second day.

State CM Shivraj Singh Chouhan praised the oxygen management model of Khandwa. Dwivedi came to know in conversation with the oxygen tanker driver that there is gas left in the tanker which can be removed. On the advice of the driver, lifting the front part of the tanker by 9 inches got enough gas to carry oxygen for three days in the ICU of newborns in the hospital. Shivraj Singh Chouhan also praised this and thanked the drivers.

Accounts of daily oxygen, remdesivir, beds were being taken from hospitals. Utilization of one cylinder each was taken from the hospitals. With the help of oxygen cylinders and concentrators, oxygen beds were arranged in Corona Care Centers of different areas apart from GMC by making a strategy to treat corona patients near home. Daily cylinder refills were done at these places. It has been made mandatory for hospitals to make corona patients talk to the family daily on video call, give health updates to the family members. A district level officer was made in-charge of every ward of the medical college, who was ready for any kind of need and order.

The DM said that now with a positivity rate of 2.89 percent, Khandwa is at the bottom of the whole of Madhya Pradesh in terms of corona cases per lakh population. Khandwa was at number four in the state in May 2020 but is now at number 45. The administration also used a stick of law to control Corona. Between May 2020 and May 2021, a fine of Rs 1.35 crore was collected for violating the lockdown rules while more than 300 cases were filed.