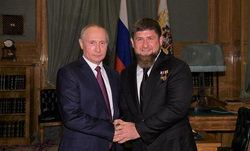 On Friday, October 7, the Vladimir Putin Olympic Judo Training Center was solemnly opened in Grozny. This was reported by the head of Chechnya Ramzan Kadyrov.

“Together with the Deputy Prime Minister of the Russian Federation Marat Khusnullin, we opened the Vladimir Putin Olympic Judo Training Center in Grozny. The event was timed to coincide with the 70th anniversary of the head of state. […] I am sincerely glad that the new center will bear the name of Vladimir Putin, who himself is a master of sports in judo. Thanks to his support, our First President, Hero of Russia Akhmat-Khadzhi Kadyrov began the revival of the Chechen Republic. The continuation of his noble cause has led us to truly outstanding successes,” Kadyrov wrote on his telegram channel.

According to the head of Chechnya, the sports facility includes a large judo hall designed for 700 seats. In addition, the center has separate fitness rooms for men and women, a hotel and much more. “Ideal conditions have been created here for holding tournaments at the world level, as well as for the high-quality organization of training camps and training not only for local students, but also for the national team,” Kadyrov emphasized.

On Friday, October 7, Russian President Vladimir Vladimirovich Putin celebrated his 70th birthday. Patriarch Kirill urged believing Russians to pray for the health of the head of state. Kadyrov, on behalf of the Chechen people, wished the Russian leader good health, long life and “success in serving the great Motherland.”