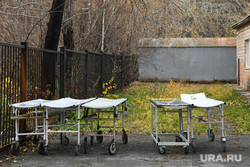 “The identity of the deceased was established, this is a local resident born in 1960. The Investigation Department is investigating. An inspection of the scene was carried out, a survey of residents of the house and eyewitnesses was carried out, the body is under forensic examination, ”said Alexander Shulga.

Earlier, URA.RU reported that near the house on Kalinin Street, 8, they found the body of a man who appeared to be dead for more than 50 years. At that time, law enforcement agencies were on the scene. The agency also wrote that in Yekaterinburg on the night of September 29, the body of a man was found on Tchaikovsky Street, 56. According to eyewitnesses, the Yekaterinburger fell out of the window.