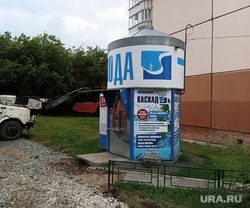 In Perm, the vending company Kaskad LLC, co-owned by the wife of the former mayor of the regional capital Arkady Kamenev, has increased the price of drinking water in its street vending machines. The cost of five liters in the devices has increased from 20 to 22 rubles.

“Artesian drinking water “Cascade” in bottling 5 liters. The price is 22 rubles. Water in the seller’s container in accordance with federal law No. 54-FZ is 52 rubles, ”the description of the goods on street machines says.

As residents of one of the Perm microdistricts told URA.RU, the cost of water in street vending machines of Kaskad LLC has increased since October 3. “Even on Sunday, they collected water in five-liter bottles for 20 rubles, and on Monday the price had already increased. Moreover, there were no announcements with a warning about the increase in cost, ”Perm residents complained to the agency correspondent. The director of Kaskad LLC, Igor Cherevikov, refused to comment on the reasons for the increase in the price of goods to URA.RU.

In another Perm vending company, Zhivaya Voda LLC, the agency correspondent was told that entrepreneurs have the right to set water prices on their own. “For example, our company only produces devices and provides small businesses with an entrepreneurial model. Each owner of the vending machine determines the price himself, which depends on the region, on the price of water from the supplier, the cost of filters and accessories. Judging by the situation on the market, today there are no prerequisites for increasing the cost of drinking water in Perm, ”the Zhivaya Vody press service told URA.RU.

The Perm enterprise Kaskad LLC is engaged in the sale of drinking artesian water through branded vending machines. According to the SBIS service, the company has 7 owners. Most of the shares in the authorized capital (30%) belong to Tamara Kameneva, the wife of Arkady Kamenev, who headed the mayor’s office of Perm in 2000-2005. Earlier, URA.RU said that a vulnerability was discovered in the bottling system of Kaskad LLC’s outdoor devices, which made it possible not to pay for water.