The army units, led by the Commander-in-Chief of the Central Military District (CVO), Colonel General Alexander Lapin, showed their best during the Russian special operation in Ukraine, so criticism of him is unfair. This was stated to URA.RU by a member of the Yekaterinburg City Duma, a veteran of two Chechen campaigns and a Hero of Russia Sergei Voronin, commenting on the publication in the telegram channel of the head of Chechnya, Ramzan Kadyrov.

The day before, Kadyrov accused the Hero of Russia Lapin of surrendering Krasny Liman (the allied forces left it on October 1). According to Kadyrov, the military leadership allegedly did not provide logistics and timely decision-making at the site. Kadyrov was publicly supported by businessman Yevgeny Prigozhin, who associates himself with the Wagner battalion-tactical group.

“I read the statements of Ramzan Kadyrov and Yevgeny Prigozhin to Alexander Lapin, commander of the troops of the Central Military District. General Lapin has been leading the Center group in the Donbas for several months, and during this time the Brave group has shown great success in Svetogorsk, Drobyshev, Lisichansk, and Seversk. From his comrades-in-arms, I heard only positive feedback. Therefore, the position of the critics is simply incomprehensible and unacceptable,” Colonel Voronin said. 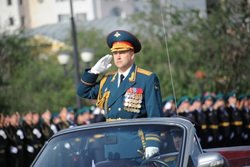 Military observer Baranets: statements that Surovikin will take Liman are not true

Voronin knows Lapin personally, he added. “General Lapin is a talented military leader. I can assume that the decision that was made on Liman is the only correct one in the current situation. As a military man, I will say: it is unacceptable to doubt the actions of the command in the war, ”concluded Voronin.

This is not the first public statement in support of Lapin. Earlier, in defense of the Hero of Russia, for example, the authors of the Rybar telegram channel (942 thousand subscribers), covering the special operation of the Russian Federation in Ukraine, and the former deputy of the Perm Legislative Assembly Alexander Grigorenko, who participated in the SVO, spoke out.