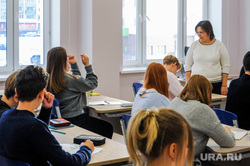 Governor of the Kurgan Region Vadim Shumkov spoke about new ways to support talented children and teachers. The head of the region made such a statement on Teacher’s Day at the opening of a new modern educational center “Constellation” of the “Chumlyak” complex.

“Every year, the three best teenagers in shifts: science, sports and art will receive, in addition to the honorary prize, financial awards in the amount of 30 thousand rubles. In addition, the three best teachers in these shifts will also receive a financial bonus from the government of the Kurgan region of 100 thousand rubles each, ”Shumkov’s words were published in the telegram channel Kurgan Region Officially.

The first beneficiaries of such measures have already been identified. They were: the winner of the final stage of the All-Russian Olympiad for schoolchildren in mathematics, the winner of the competition “Young Talents of Russia” and the champion of the Russian championship in judo. “At the opening ceremony of the educational center, Vadim Shumkov presented the talented children with symbolic keys to new laboratories, halls and workshops,” the message says.

Earlier URA.RU wrote that the governor of Kurgan congratulated teachers on Teacher’s Day in an informal manner. The head of the Kurgan region suggested that “a gradual improvement of the education system is beginning.”