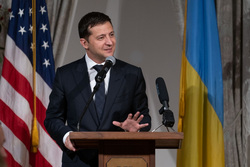 Ukrainian President Volodymyr Zelensky is a “bogus” in the hands of the administration of US President Joe Biden. It is this fact that still does not allow ending the conflict in Ukraine. This is reported by the American television channel Fox News.

“Zelensky is a client of the Biden administration that runs his country, and the ideologues within the Biden administration did not want a negotiated peace in Ukraine. They wanted all the time, and now it is quite clear, a regime change war against Russia,” columnist Tucker Carlson said on the air of the TV channel. The observer noted that earlier Ukraine was ready to assume neutrality and not join NATO, which would allow not to provoke Russia. Among other things, Zelensky was ready for peace talks with Moscow at the beginning of the conflict in Ukraine, but this was not beneficial for Washington.

Carlson adds that Ukraine is now applying to join NATO. This fact, in his opinion, can mean only one thing – the beginning of a world war. “This is not an opinion. It is a fact. Article 5 of the NATO Charter, the Mutual Defense Clause, guarantees that this will happen,” Carlson concluded.

President of Ukraine Volodymyr Zelensky applied for the country’s entry into NATO on September 30, immediately after the liberated territories were accepted into Russia. Later, the presidents of 9 countries of Central and Eastern Europe, in a joint statement on October 2, said they supported Ukraine’s membership in NATO. Bulgaria refused to support Ukraine’s entry into NATO, reports “Tsargrad“.