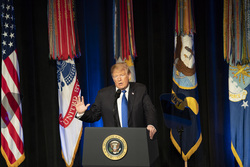 The United States has become a laughing stock for the whole world, thanks to the work of the administration of US President Joe Biden. This was stated by former American leader Donald Trump.

“The world is laughing at us, looking at us with mockery,” Donald Trump said at a supporter event, RIA Novosti reports. He stressed that the Joe Biden administration is destroying the idea of ​​the “American dream”, which is why the country has problems.

Earlier in the United States, Biden was accused of failing the “mission” of a real Western leader. Trump also said that the United States needs a leader similar to Russian President Vladimir Putin. Recently, Biden’s trust rating has fallen lower than that of his predecessor, Donald Trump, to 41%.