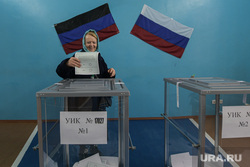 Colombian military commissar William Parra has dispelled Western myths about the referendum, that people vote against their will. He told about it to the correspondent of URA.RU.

“I perfectly understand that people who come here are tired of living in constant fear. They want the country to recover. They want a normal job, they want to live in peace. Therefore, I would say that this is a vote of hope, ”said the military commander. He also noted that if there is pressure on the residents of the liberated territories, it is only from Ukraine.

Earlier, URA.RU reported that the EU plans to include referendum observers in the new sanctions. Moreover, anyone can fall under the sanctions, regardless of belonging to the country. An observer in the referendum from Bulgaria has already reacted to this and called possible EU sanctions fascism, writes RT. In turn, Europe called Zelensky the biggest security threat in the world.National News Service”.