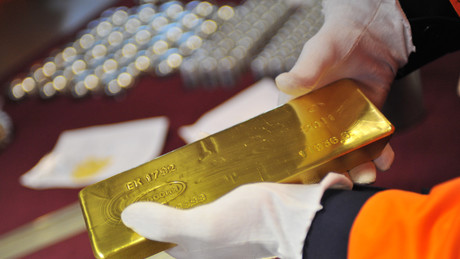 The West has decided to deal another blow to Russia’s revenues and ban gold exports. Four countries – Great Britain, the USA, Canada and Japan – have announced such an embargo. Germany and France showed support for these sanctions, which were the result of the G7 meeting. However, they cannot adopt them on their own as they have to discuss the issue with other EU members. Most likely, the EU’s imposition of a gold embargo on Russia is just a matter of the time it takes to complete the formalities.

US President Joe Biden assures that this will be a heavy blow to Russia’s foreign trade. US Secretary of State Anthony Blinken says it concerns “the second most lucrative export item Russia has after energy”. Blinken estimates that the G7 countries’ ban on gold imports from Russia would cost the country $19 billion a year in revenue.

According to data from 2021, Russia sold 301 tons to foreign markets at current prices worth $19 billion. According to analysts at Freedom Finance, most of Russia’s gold – 90 percent – was bought by the UK last year for $15.4 billion (as London is the largest trading center for precious metals alongside New York). Also in Europe, Russian gold was purchased by Switzerland for $422 million and Germany for $318 million. In addition, gold with a total value of $1.134 billion was bought from other importers from “friendly” countries.

It is interesting that the collective West has so vociferously announced a new crackdown on Russian revenues, when in fact the trading ban on Russian gold in London dates back to March 2022.

“This happened when the London Precious Metals Association revoked the international certification of Russian gold bullion when the bullion was stamped as conforming to the sample and admitted to the international market. Since then we have not shipped any gold bars to Europe, Canada or the USA“,

So why have the G7 countries made such a fuss about formally imposing sanctions?

First, it is an opportunity to add weight to the G7 meeting. It would be a “shame” for the politicians not to mention the issue of Russia and not to punish Russia in any way. And finding a new punishment that is loud but doesn’t further destroy the economies of developed countries is no longer that easy.

Second, it could be a smart move to punish other countries. “Such a declaration may have been made at the G7 level to place other countries under secondary sanctions“Vyazovsky does not exclude.

Given the formality of the official sanctions, the blow to Russia may not be as serious as the US is trying to portray.

For one thing, the revenue from gold exports is actually substantial. Russia even earns less from arms exports – $13 billion in 2020. And yet, measured against total earnings, this is not a critical share. Even the export of agro-industrial products adds up to a much more significant amount of money – in 2021 it was $34 billion. And Russia’s total export earnings last year amounted to $498 billion. “In 2021, household revenue from gold exports was about 7.57 percent, this year it would be about 5.35 percent, taking into account changes in the dollar exchange rate“, calculated the analysts of Freedom Finance.

In addition, Russia has every chance of diverting gold exports from the West to the East. Vyazovsky:

“Russia is already seeing an upturn in gold trading with the United Arab Emirates. We are now delivering bulk gold bars to Dubai. India and China will soon join them“.

Dubai has probably become a trading hub for Russia’s gold, where it can be bought by anyone who wants it.

The expert draws a parallel with the sale of Russian oil, where India has suddenly become the main buyer. Indians buy Russian oil at a discount of about $30 on the world market price and can then use it for their own needs or sell it on to others at the market price and make money off it.

Vyazovsky is confident that India and China – the two largest consumers of gold – will also become active buyers of Russian gold, as will the UAE:

“The destruction of global trade is taking place before our eyes. Even China is concerned and has started selling its dollar reserves because it understands that, should anything happen, those too can easily be blocked. And the gold is stored at home, it is not threatened by anything. Second, India and China are the main producers and consumers of jewelry“.

Therefore, Russian gold will find a new buyer, most likely on the other side of the “barricades”.

“In today’s world, it’s actually very difficult to ban anything. Russia accounts for almost ten percent of global gold production. Gold is a liquid currency. Once the money stops working, the gold will keep going. The water will always find a way“,

sums up the Vice President of Golden Mint confidently.

“Another way to mitigate the impact on the gold industry is to bolster central bank reserves through increased gold purchases. If the regulator decides to increase gold purchases in the domestic market, it could provide strong support to the industry“.

If the government reintroduces the “fiscal rule,” it would be logical to use the oil and gas deals (and prices are still rising) to buy gold and yuan instead of the “inaccessible” dollars and euros.

As for the price of gold, there is no definite answer here as to whether prices will rise in light of the official ban. First, the announced embargo of the G7 countries is more of a formality and symbolic. Second, there are suspicions that gold prices are now being artificially dampened. Alexey Vyazovsky on this:

“In 2020, a historic record of almost $2,000 per troy ounce was set. We are near him now. However, it is obvious that the price of gold is being manipulated by central banks in developed countries. There is a tacit understanding not to allow gold to rise above a certain level lest it become a competitor to fiat currencies, which the central banks of developed countries can print in unlimited quantities. Once that level is reached, they sell gold en masse from their vaults, which pushes the price down.

Predicting the price of gold is therefore quite difficult:

“Theoretically, if we assume that the Central Bank of Russia announces the conversion of oil dollars, or in general all trades, to gold, prices will take off like a rocket, up to $7,000 or even $10,000 per ounce. And that will not be the limit” says Vyazovsky.

As for domestic demand, the Russian government has eliminated the 13 percent income tax and 20 percent sales tax on bullion sales by the end of 2023, allowing people to invest their savings in gold.

A boom in buying physical gold by the population was seen in March when VAT was abolished. A second followed after the income tax was abolished, but now no new demand can be observed, according to Freedom Finance.

“Turnover in the sale of gold bars has increased, but it cannot be said that there has been a large increase. A lot has been done, but there is still a lot to do. For example, legal entities are not allowed to trade in gold. Private individuals cannot trade among themselves either. You can only sell the bars to banks, and they are very reluctant to buy them back, requiring expert verification, etc. There is still a lot of work to be done in this direction“,

It should be remembered that gold miners already have a choice to sell abroad or to the Central Bank of Russia. First, however, the Russian central bank buys gold at a discount of 15 percent on the market price. Second, she pays in rubles. However, the miners have to repay foreign currency loans and buy imported equipment, so they need foreign exchange earnings.

Gold miners may initially find it difficult to restructure their business focused on London, the center of the world’s gold trade.

“Sanctions on gold could prove sensitive to the industry as most of the metal mined in Russia – more than 80 percent in 2021 – is exported“Pukhkarev said. According to him, all Russian gold mining companies could be forced to sell gold at a discount, he said. Polyus would be in a better position, since the share of export earnings in 2021 was less than two percent. Polymetal achieved on the other hand, in 2012 about twelve percent of the income came from exports to the EU and a total of 56 percent from sales outside Russia.

The most important foreign market was Kazakhstan with 35 percent of the total income. It is still unclear how Kazakhstan will react to the imposition of sanctions by the G7 countries and possibly the EU. On the other hand, according to Pukkarev, the impact of the sanctions could be mitigated by the fact that Polymetal has diversified its production into silver.

Russia’s fourth largest gold mine, the Petropavlovsk company, is already struggling. In mid-May, the company failed to pay $12.36 million in debt on dollar-denominated Eurobonds on time. Earlier, the company failed to repay a loan to Gazprombank. The thing is, the gold miner is registered in the UK but had a loan with Gazprombank, which was placed on the UK sanctions list at the end of March. As a result, Petropavlovsk was unable to transfer funds to a Russian bank to repay the loan.

Translated from the Russian

RT DE strives for a broad range of opinions. Guest posts and opinion pieces do not have to reflect the editor’s point of view.