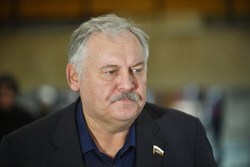 Deputy of the State Duma of the Russian Federation Konstantin Zatulin doubted that the threat of UAF attacks on new Russian regions is a reason for using nuclear weapons as a defense, in fact calling the annexed territories second-rate. The remark was made on the program “Evening with Vladimir Solovyov”.

“Let me remind you of our Nuclear Doctrine. The use of nuclear weapons will only be discussed if there is a threat to the existence of the Russian state as such … In my opinion, at the moment there is no such threat, ”said the deputy.

Zatulin allowed himself to say that the territories of the annexed regions are not entirely Russian, forgetting that the inhabitants of all the new regions unanimously voted for joining Russia. “The new regions of the Russian Federation are a disputed territory with Ukraine,” he said.

Russia has been conducting a special operation in Ukraine since February 24 by decree of Russian President Vladimir Putin. During it, Russia has already managed to liberate the territories of the LPR, DPR, Kherson and Zaporozhye regions. In September, referendums were held in these territories, as a result of which the inhabitants decided to join the Russian Federation. In their opinion, this will help to get rid of the genocide by Kyiv.